How to communicate with locals

We surveyed British holidaymakers to see what we worry about most before jetting off, the different steps we take to be able to communicate with locals and uttering those 4 words "Do you speak English?".

Everyone needs a holiday. Feeling overworked, fatigued and fed up of relentless grey days is almost guaranteed to have people craving sun, sea and serenity to recharge their batteries. Those two weeks can appear like a beacon in the calendar, promising stress-free bliss and a detox for the mind and body. So, when things go wrong on holiday, it can feel amplified. “It wasn’t supposed to be like this. I wasn’t supposed to lose my passport/fall ill/have to sit in an airport for six hours waiting on a delayed flight.”

The worries that vex UK travellers the most are unsurprising. Lost or stolen passports and possessions, illness and flight issues all figure highly. We surveyed over 2,000 UK adults1 about their attitudes towards holiday worries, travel insurance and communication methods. The most significant concern among those surveyed was their passport being lost or stolen while abroad. While 38% of all respondents said this was a worry, it was of particular concern to those aged 18-24, 53% of whom said it was something they worried about before a holiday.

Younger people appear more inclined to worry about running into problems on holiday in general. Only 11% said that they have no worries at all before going away, compared with 27% of people aged over 55. Theft or loss of possessions is another major worry for the younger group, as is the potential to become ill or have an accident while abroad. 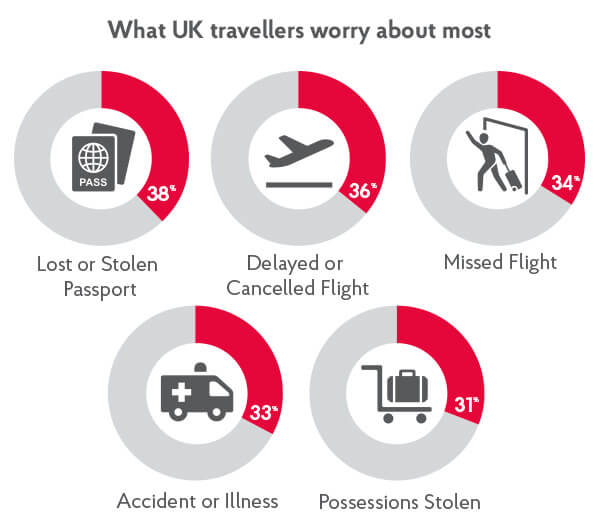 Previous studies2 have discovered that the vast majority (82%) of young British holidaymakers admit to being more daring while on holiday, raising the potential for accidents to occur. This presents an issue when this group also displays the laxest attitude towards travel insurance. Only 44% of 18-24 year olds claimed to always buy travel insurance, compared to 72% of those aged over 55, and 60% of 46-54 year olds.

Worries about what might happen on holiday are one thing. What is actually likely to happen can often be a different story. Passport theft might be a major worry for travellers, but the Foreign & Commonwealth Office has seen a 19% reduction over the last five years3. There were 21,070 British passports stolen worldwide in 2015/2016, with 5,158 happening in Spain, most likely because of the number of British holidaymakers heading over there. Spain also tops the list for hospitalisations. The cost of treatment abroad can be much higher than in the UK, especially in the USA, further emphasising the need to be insured when heading off on holiday.

Mishandling of bags is also decreasing, even as passenger numbers increase. The number of mishandled bags dropped by 7.2% between 2015 and 2016 and that trend is expected to continue in 2017 as tracking systems improve. In 2016, 5.73 bags were mishandled per every 1,000 passengers4.

"Do you speak English?"

Holiday calamities are bad enough in themselves, worse still when uninsured, but things can be further exacerbated by language barriers. When you’re already stressed, being unable to make yourself understood can render the situation more hopeless and frustrating. Half of all UK tourists said they would communicate with locals using some phrases they learned in advance, whereas 43% said they would just speak English. Men are far more likely to rely on their native tongue than women, 48% versus 39%, while women are more likely to learn the local language. 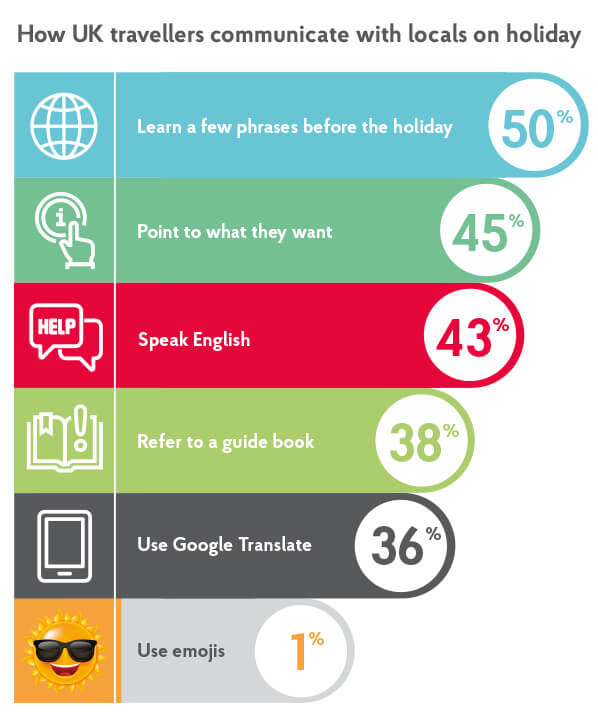 In situations involving medical emergencies, communication methods change slightly. The most common solution was to find someone to translate, whereas 52% of 35-44 year olds would take the less reliable route of using Google Translate. Only 1% of people said they would use emojis to communicate with locals in everyday situations, but this number doubles when needing medical assistance. 5% of 18-24 year olds said they would use the little digital images to converse in such a situation, significantly more than their less digitally minded counterparts over 45.

While emojis might be intrinsically linked to the digital world, they’re not exactly a new concept. The term comes from the Japanese “e” (meaning picture) and “moji” (meaning character) and their use as a digital means of communication dates back to Japanese mobile phones in the 90s. The use of images to communicate goes back much further, however, as far as ancient Egypt and hieroglyphics. Linguistics experts have said that emojis are already far more advanced as a method of communication than their ancient equivalent, although many regard emojis as a step backwards in linguistics. A study by Talk Talk's discovered that 72% of 18-25 year olds feel better able to express their feelings by emoji than the written word, which would account for their increased likeliness to use them while abroad. 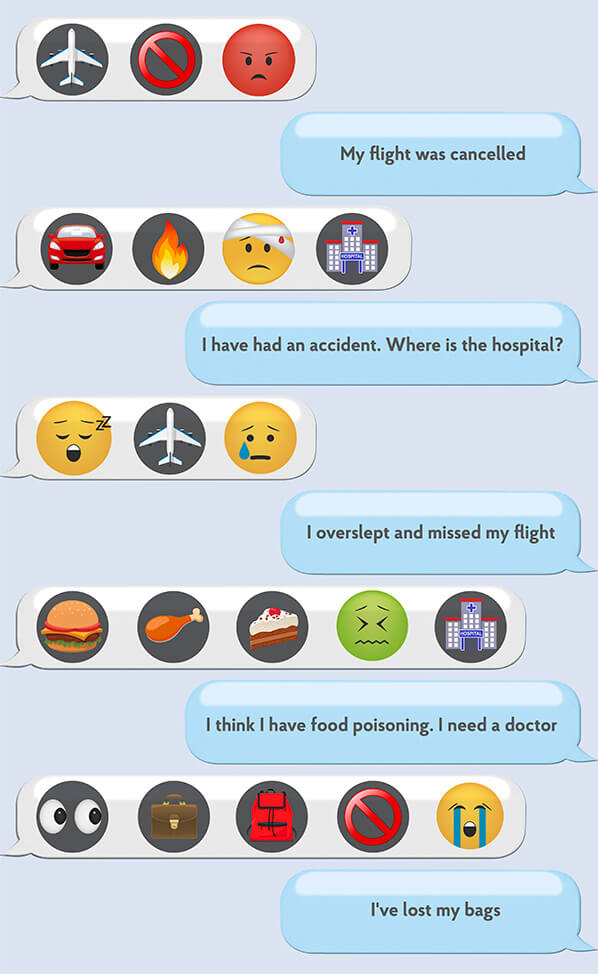 As the range is expanding, to coincide with World Emoji Day, it would seem that emojis are here to stay, for better or worse. So, if you find yourself stuck in a communication breakdown on your next holiday, why not take advantage of this universal language to help make yourself understood?

Pack the essentials with our pre-travel checklist

What liquids can you carry on flights?

Take the hassle out of packing your hand luggage with our guide to carrying liquids in hand luggage.

How to get upgraded on a flight

Check how to get free upgrades on flights with Post Office travel tips.

Knowing how much to tip on holiday can be a minefield, follow our guide to tipping ettiquette.