15 winter sports you know you want to try

It’s getting toward that time of year when, if you’re a snow-person, you might be about to plan your annual getaway for the slopes. It might be your twentieth time expertly skiing moguls, or your first time getting a cold bum on a snowboard. But there’s a lot you can do that you may never have tried before.

The mountains aren’t only there for skiing and snowboarding. Alpine terrain offers a huge amount alongside its most popular activities, and we don’t just mean wearing knitwear and eating fondue.

Here’s our list of snowy activities you're typically covered for if you get ski cover when you buy travel insurance. Some of them you might have heard of, others not, and some you might not be able to figure out without reading on.

Whichever insurer you choose, always make sure that you’ve got the right cover in place for your travel and that you thoroughly understand your policy document before taking part in something to be on the safe side.

Yep, this is certainly one that has people scratching their heads. No, it’s not hover boarding, which is disappointing. But it’s no less fun. An airboard is basically an inflatable sled that people ride on their stomachs.

It’s a lot less fiddly than skiing or snowboarding: no bindings, clips or special equipment other than an inflated “air board” and standard safety gear. Imagine bodyboarding but on an airbed going down a ski slope and you’ve got a pretty accurate idea.

Another one that conjures misleading imagery. This isn’t searching for the fabled yeti on skis, but is about skiing on big feet.

Big feet skis are smaller than snowblades and some are even shaped to look like – you’ve guessed it – big feet. They attach like normal skis but are only marginally bigger than your own feet at the front and back.

This is a fun activity for on-piste but can be troublesome off. Since your weight isn’t being distributed very widely, you’ll have more fun on tightly-compacted snow such as on designated slopes.

For the more resilient among us, there’s cross-country skiing. This is an amazing way to see parts of a mountain’s terrain that you wouldn’t get to see normally, as it involves trekking on skis, often on roads that are flat or inclined. 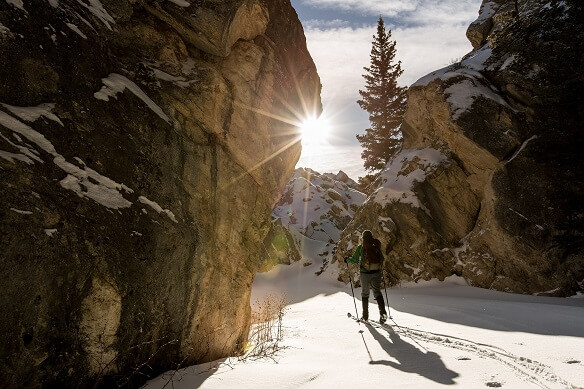 It’s important to stick to designated and recognised paths with a guide as it’s significantly more physically strenuous than first glance suggests and it’s vital to be safe at all times. Importantly, you wouldn’t be covered by your insurance if you left a designated path.

This might seem obvious – surely all skiing is downhill? Well, with the exception of cross-country skiing, yes, but downhill skiing is a specific thing.

Broadly, downhill (or Alpine) skiing is normal skiing in that it isn’t cross-country, jumping or Telemark skiing. But it also refers to a kind of competitive skiing where the fastest time for a specific route is run.

Remember that any kind of professional, competitive or racing activities are unlikely to be covered by your travel insurance, but practising your downhill technique for the sheer fun of it is fine.

Glaciers are without a doubt one of the most magnificent wonders of the natural world and cover vast areas. To explore one up-close can take a while due to their immense size, but as long as you go as part of an organised group and don’t stay overnight, you’d usually be covered to go. 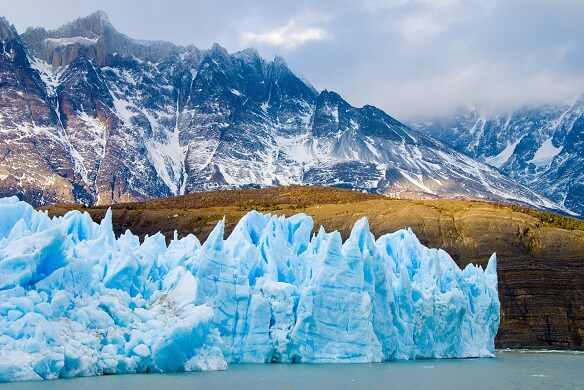 Safety is paramount with glacier walking as, obviously, surfaces can be unpredictable and the terrain difficult to negotiate. This is why it’s imperative to go as part of an organised trip.

What image of wintery mountain life could be better than a sled pulled by huskies? As well as the remarkable strength of the dogs, you could be spellbound by the winter wonderland you’re travelling through.

You might think that husky sledding is a more laid-back winter activity and less labour-intensive. Well, perhaps, but not by much. Hanging onto the sled as it takes corners and rides over bumps is part of the fun, but don’t expect the relaxing romance of a horse-drawn sleigh. 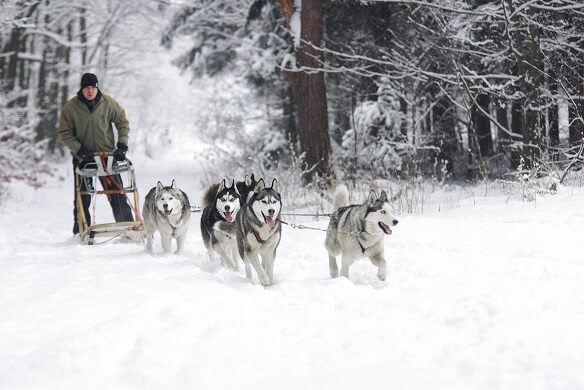 What you can expect is exciting exposure to beautiful mountain terrain and an unforgettable experience. Note that you’d only be covered if you were taking part with an official local driver (or “musher”).

After a day on the slopes, an evening can be made complete with a romantic skate around the ice rink. Many ski resorts have one and they are often in the centre of towns, meaning you’ve got easy access to nightlife and the prospect of a warming meal afterwards.

Going as a passenger on a reindeer-pulled sledge is a truly unique experience and is a popular activity on trips to Lapland. To be covered, your reindeer trip would need to be through an official organiser. 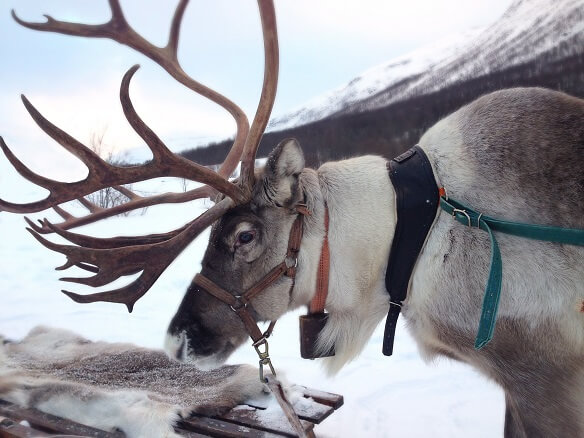 Going on a trip with these majestic creatures may be a once-in-a-lifetime event, so you could try and time it with an opportunity to see the Northern Lights.

We’re back into the physically-demanding stuff now, with mogul skating being a thrilling ride for anyone who takes part.

When skiers and snowboarders take regular, sharp turns, they throw snow out. If skiers use very similar routes day after day, the snow they chuck out can create mounds over time. These can become quite tall, and are called moguls. Skiing or skating them is challenging but worth the effort. Just don't try and use them as kicker ramps.

If you reduce the length of skis, they stop being skis and start being blades. This can have a number of advantages. It’s more like roller-blading or skating than skiing, which might be a more familiar activity for those going on their first ski trip. They are highly manoeuvrable and are popular at snow parks. It’s common for people to find that it is easier to learn snowblading than skiing or snowboarding.

There are lots of types and shapes of snowblades that each have different advantages, with some behaving more like skis and other like individual snowboards for your feet.

Whatever’s right for you, there’s no denying that snowblading is one of the most fun winter sports and something worth trying regardless of your level of skill on skis or a snowboard.

As you hurtle down the slopes, you have a lot to focus on and might not have the time to take in the amazing countryside rushing past you.

Ski run walking is a fantastic way to take in the landscape at your own pace. It’s basically what it says on the tin – walks along ski routes, particularly the more level ones – and is often done at night when the tracks are not in use.

There’s something truly mesmerising about walking along alpine roads with light coming from flaming torches and the moon.

It’s important that you go as part of a guided tour, as it can be easy to get lost, particularly after dark, and doing so could be disastrous in cold conditions.

This is the alpine equivalent of what people often do on their summer holidays. But in many ways, snow tubing is easier and safer than being pulled along in a rubber ring by a boat.

Typically done on easy slopes, this activity doesn’t require any skill and can get the blood pumping. Always wear appropriate safety gear in case you go over.

A Ski-doo is a branded form of a snowmobile but, like Tarmac, has come to mean something in its own right. There isn’t much difference between a Ski-doo and a snowmobile, but organisers might refer to one or the other for activities.

A snowmobile is basically a moped on skis. But it’s much more stable, and a hugely fun way to get around a mountain. Ski-doos and snowmobiles are a necessary part of mountain life, as they enable staff to get across tricky terrain quickly. As activities they’re great fun and can be picked up quickly. Make sure that you take all necessary safety precautions and go out with a licensed operator.

If you’re an experienced skier or snowboarder, going off-piste can be the next step in your competence. It’s exhilarating and gives amazing access to parts of the mountain that are less-used, as well as feeling quite a lot like flying. But it also comes with hazards. 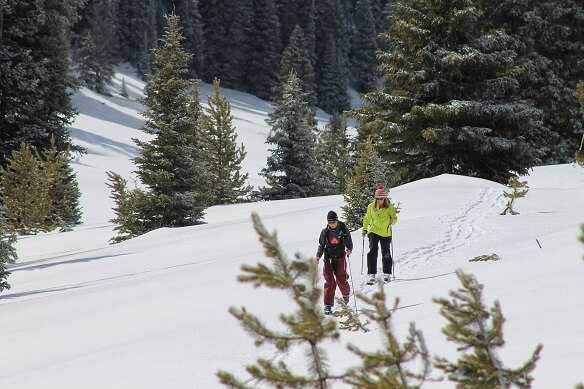 When snow hasn’t been packed, you can’t tell what’s lying just under the surface. Rocks and boulders can put deep scratches in equipment surfaces or cause serious injury. The depth of snow can be very hard to judge – I once found myself falling from the top of a house that I simply hadn’t seen as I boarded over its roof – and in some situations there is the risk of avalanche.

If you want to go off-piste, make sure it’s within resort boundaries and on recognised paths. Not only is this safer, but it also means you’re more likely to be covered by your travel insurance. Deviating from this can leave you without cover and exposed to unnecessary danger.

We had to chuck this one in as, while they’re not really winter sports, they’re a lot of fun too. Mountain communities have had centuries of practice in perfecting the ideal post-ski relaxation, so after a hard day’s hurtling down mountains there’s little more enjoyable than a warm cup of something wonderful and a roaring fire to get the blood back into your toes.

*All of the activities listed above are covered by Post Office Travel Insurance. You must add the winter sports add-on to be covered. Please read the policy wording for full details.