Hundreds of thousands of Brits travel to New Zealand each year, braving the 24-hour flights each way to become immersed in its spectacularly dramatic landscapes. From providing the ultimate in adventure holiday experiences to a culturally-unique getaway for people keen to see the world, there’s something for everyone across two main islands and hundreds of smaller ones.

With its emphasis on adventure travel it’s vital to have good travel insurance and make sure you’re fully covered for all of the activities you want to take part in. Remember that there can be exclusions on activities. For instance, hiking and cycling may be covered but only up to a certain altitude or only if wearing a helmet. This is why having a thorough understanding of your policy is important to staying covered.

Healthcare for Brits in New Zealand

The UK enjoys a reciprocal healthcare agreement with New Zealand, which entitles British citizens who are visiting to medically necessary healthcare on the same terms as locals.

There are a few conditions for eligibility:

You’ll need to provide your passport to be approved care.

There is also a government body committed to paying for healthcare if you need medical treatment as a result of an accident. This is called the Accident Compensation Commission (or ACC) and you will be asked to complete a form in hospital so that payment can be arranged to cover your healthcare costs.

Despite this healthcare arrangement, it is very important to have travel insurance with good healthcare. Not only is this to cover non-emergency medical care not covered by the reciprocal healthcare agreement, but travel insurance provides cover for a wide range of eventualities outside of the medical sphere.

Many of New Zealand’s most breath-taking attractions are in remote areas without rapid access to medical facilities. It’s imperative that you let friends and others know your travel plans within New Zealand so that someone is aware of where you are at any given time.

Most of the most pressing risks in New Zealand are natural disasters and the dangers inherent in adventure activities.

Unlike its neighbour Australia, New Zealand has very few dangerous animals. In fact, the UK has more poisonous snakes.

Adventure sports come with inherent danger and can easily lead to injury when proper safety procedures aren’t observed and unnecessary risks are taken. If you are going to be taking part in activities like this, it’s important to make sure you’re going with a well-established provider with a good reputation for safety.

You can put yourself at risk by doing activities beyond your fitness tolerance in remote areas. This can be compounded if people do not know where you are and you become stuck or lost. While New Zealand might be relatively safe from the perspective of dangerous animals, its elements are unpredictable. It is common to experience four seasons in one day, with blue skies giving way to heavy rain and hail at a moment’s notice.

Being exposed in these conditions, particularly at altitude, can be dangerous, so don’t take any unnecessary risks.

If you go on a ski trip while in New Zealand, make sure you have appropriate ski cover.

If you need an ambulance, call 111 and request one.

New Zealand takes its sport very seriously, with rugby union in particular and the New Zealand national side – the All Blacks – having an iconic status. Arts and culture are well-catered for in major cities and festivals of art and music happen regularly. The arts and culture can often have a distinctive flavour thanks to the extensive Maori influence and the political ideals of the nation.

The great outdoors are central to Kiwi culture. You’re never more than 75 miles from the sea wherever you are in New Zealand, and there’s provision for some kind of adventure sport or outdoor pursuit regularly up and down the country.

The only place where this might be more difficult is in Auckland, the country’s most populous city. But even in Auckland, lots of the top 10 activities are outdoors – like Bethells Beach, Mount Eden, Cornwall Park and Hauraki Gulf.

There’s a lot of shopping and culture, as well as tours to iconic parts of the country. For anyone who hasn’t been to New Zealand, its spellbinding scenery is probably most familiar from the Lord of the Rings and Hobbit films, which were filmed entirely in the country. 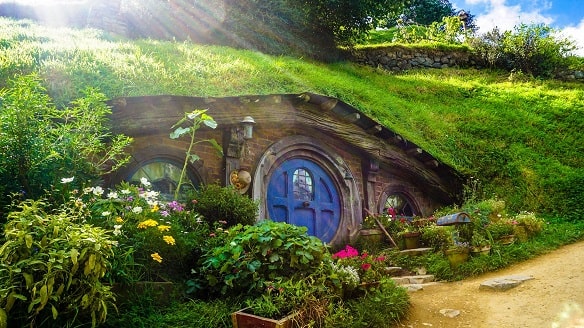 Indeed, what has become known as Tolkien Tourism has brought travellers from all over the world to visit their favourite locations. The set of the Shire – a sleepy, rural village – is now a permanent tourist fixture, where visitors can even get a drink in the Hobbiton pub The Green Dragon. So widespread was Peter Jackson’s use of the country for the film that for the premiere week of The Hobbit: An Unexpected Journey, Wellington formally changed its name to “The Middle of Earth”- including stamp postmarks and newspaper mastheads.

Since the films used such a diverse range of the country’s geographical features, visitors can tour innumerable locations across the entire country. There are many tours available and even if you’ve never seen the movies, the sights are worth it anyway.

If you’re keen to see as much of the country as possible, it’s very common for visitors to rent cars. Road travel is the most common way of getting around. People who backpack for a few months or more might even go so far as to buy a car, as on balance it can work out more economically, but if you go down this road then be aware you’ll have many more hoops to jump through than if you’re only renting, as well as the hassle of selling the car at the end of your trip. And you will need to ensure that you have all of the necessary insurance in place.

Whether you rent or buy, you might consider getting a campervan, allowing you to sleep while on the road. If you’re not afraid of some minor discomfort, this can be a very cost-effective way of travelling the country. With New Zealand’s Freedom Camping option, you can camp a great many places of your own choosing that don’t require you stay in a campsite – but only if you have a self-contained vehicle that meets certain criteria. If you want to do this, you’ll need to make sure in advance that the area you want to freedom camp in is part of the government scheme.

The New Zealand government take preservation of the natural habitat very seriously, and heavy fines can be imposed for leaving litter and/or bodily waste anywhere. 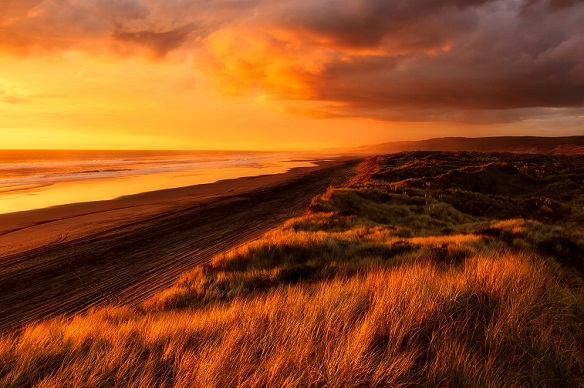 Campsites are common throughout the country and give excellent access to the great outdoors.

Internal flights are reasonably regular and often relatively inexpensive. However for distances that you could also reasonably drive, they may be less cost-effective. Train travel is not a particularly popular way of getting between cities however it does exist and can be a charming way to see the scenery.

Buses between big cities are numerous and the services vary depending on need. There are hop-on, hop-off buses, bus tours and intercity buses available with varying costs depending on budget. This can be a cost-effective way of getting around, particularly if you can’t or don’t want to rent or buy a car.

Driving in New Zealand can be a challenge for people unused to it. It can be similar to driving in rural parts of the UK, with most major roads only single-lane. There are few motorways as we would recognise them, and those that exist are either in or near major cities.

The weather in New Zealand can be unpredictable, meaning that your vehicle needs to be equipped with the relevant all-weather gear, including snow chains. Roads can be windy and hilly, so it’s important to take care and not get distracted.

To drive in New Zealand, you need a full UK driving licence, which you can use for as long as one year. The FCO advises that you take out private motor insurance to drive. The driving conventions are very similar to those of the UK, including driving on the left and most signage. Remember that their speed limits are in km/h rather than mph.

There are a number of unsealed, gravel roads in New Zealand. It’s best to try and avoid these if possible but if they are unavoidable, remember that they can be narrow, slippery and your speed and stopping time can be dramatically different to what you’re expecting. Visibility might also be affected as your tyres kick up dust.

Enjoy your trip to New Zealand

Travelling in New Zealand might be a once-in-a-lifetime trip, so make sure you can enjoy it to the greatest extent by getting the right travel insurance for you.