How to claim compensation for flight delays

This year, around 40 million flights will take place all over the world – which is an average of about 110,000 every day. Almost all of these will take off and land on time, but with bad weather, staff shortages, technical glitches and difficult passengers all to contend with, flight delays are an all too common problem. It might not be much consolation when you’re sleeping on the floor of an airport instead of a beach somewhere, but long holdups could mean financial compensation – so it pays to know what you're entitled to, when you can ask for it, and how.

How long is too long?

Under EU regulation, the first milestone is two hours. If your flight is delayed for more than 120 minutes, your airline will have to give you food and drink, access to phone calls and emails, and accommodation if you’re delayed overnight (including transportation between the airport and the hotel). These things are usually given out as vouchers, and you should ask someone from the airline if no one offers them to you. If you’re not getting anywhere with the ground staff, you can try and claim reasonable expenses back at a later date by keeping hold of your receipts.

If you’re delayed for more than three hours, you’re entitled to financial compensation providing the delay was the airline’s fault.

Post Office provide flight delay assistance to customers of our travel insurance policy, which offers complimentary access to over 650 LoungeKey™ lounges in over 300 airports for any flights that are delayed for 2 hours or more.

How much compensation am I entitled to?

For flight delays between three and five hours long, the amount of compensation you’re entitled to depends on how far you’re travelling. Amounts range from €250 (for a three hour delay on a flight less than 1,500km) to €600 (for a four hour delay on a flight more than 3,500km), and you should check the rates on the Citizens Advice website before making a claim to your airline.

For longer delays, it depends on whether or not you choose to fly. If you don’t take the delayed flight, the airline has to give you a full refund (plus a full refund for any booked onward journeys from the same airline) and a free flight back to your original departure airport if you’re part-way through a journey. If you do take the late flight, and if the delay was the airline’s fault, you can claim up to €600.

Finally, if your flight is cancelled completely you have the right to either a full refund or a seat on another plane, plus compensation depending on the distance you were travelling, the length of the delay and the notice you were given for the cancellation. Again, it’s best to check the compensation tables on the Citizens Advice website before making a claim.

How do I make a claim on my flight delay?

Your first point of contact should always be the airline that operated your flight. All the big airlines will have customer service teams that are used to dealing with flight delay compensation, and they will usually be able to help you get your claim started over the phone. Any claim you make will have to be submitted in writing and the process will be much quicker and easier if you include all your flight numbers and travel details in full, along with any evidence you have to expenses and delays (receipts, booking confirmations, even photos of information boards).

You can apply for late flight compensation for years after your trip (at least as far back as 2011), but the longer you wait, the trickier it could be to get all your evidence together.

If you’re not getting anywhere with the airline, or if your claim is rejected, you can report the issue to the Civil Aviation Authority (CAA) if your flight was delayed in the UK, or to similar national airline regulators in other countries if you were abroad. It’s worth noting that some airlines (British Airways, Easyjet, Thomas Cook and Thomson) will charge you £25 for taking an unsuccessful claim further, so it’s important to make your first claim with the airline itself as strong as possible if you think you’re entitled to compensation.

When can’t I claim?

Crucially, the airline must be to blame for the delay for you to receive any compensation. Bad weather, staff strikes, political problems and security issues are all legitimate reasons to delay your flight – and none of them can be (legally) blamed on the airline. In these situations, many good airlines will often offer food and drink along with alterative flights and even financial compensation, but they don’t have to do anything at all – and you can’t demand it. If, however, there’s an avoidable technical fault with the plane, if your flight was cancelled due to under-booking, or if the pilot turns up late, you have a good case to file a claim for compensation.

Which airlines are most punctual?

OAG's Punctuality League uses real time data to compare 'on time' performance of all the world's airlines. Below are 2017's Top 10 most reliable carriers - who's your next flight with? 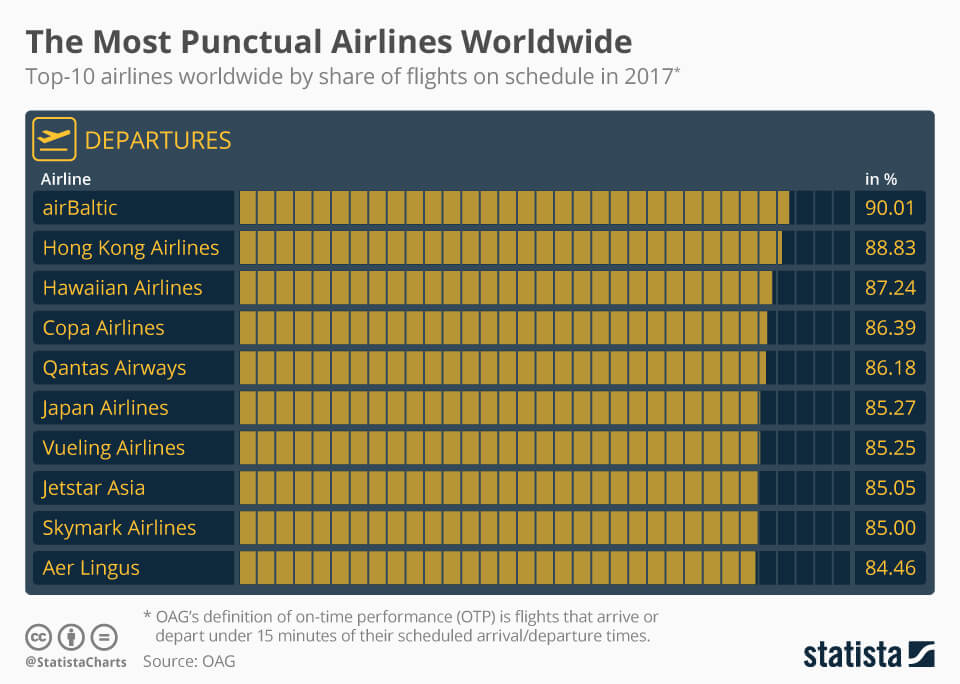 Find out when and how to claim if your luggage is delayed or missing and the airline is at fault.

What to do if your airline goes bust

Find out the difference between ABTA and ATOL and why it's important to cover your holiday with travel insurance from the day you book.

Post Office flight delay assistance is exclusive to our Travel Insurance customers, take a look at how we can help protect you against unexpected circumstances.

ATOL protection can help give UK travellers peace of mind. Find out how and why.