Best carnivals in the world

It’s almost carnival time again and all over the capital, enormous yellow feathers and excessively-spangled tops are being fished out from the backs of the wardrobes. From 1966, when the first Notting Hill Carnival was held to celebrate the growing West Indian culture in London and enhance integration, the yearly carnival has attracted visitors from all over the world.

Traditionally speaking, carnivals are celebrated just before Lent begins, signifying a bit of a blow-out before the fast (the name itself is to do with saying farewell to meat, with the original Latin “carne levare”).

But the likelihood is that its roots go further back than that to pagan celebrations heralding the coming of the spring and the gorging on what was left of the winter bacon.

There are carnival celebrations throughout the world, some traditional and others – like the Notting Hill Carnival – less to do with the religious tradition and everything to do with fun. We’re taking a look at some of the planet’s most exciting carnivals, so in case you can’t join us in W11 this year, maybe you can make it along to one (or more!) of these.

And if you want to have fun while going to a carnival abroad, remember not to overdo it, as it may invalidate your travel insurance.

There’s more to Mardi Gras in New Orleans than beads. The week-long main party has traditions aplenty, some common to all carnivals and others unique to the Big Easy. But there are parades and events from as early as January. Incredible floats, the arrival of the king of Mardi Gras and music in every available space make this colourful event a favourite for tourists the world over.

Mardi Gras' main week isn’t for the faint-hearted. If you’re the sort of person who likes everyone to wear clothes at all times in public, you might be better off visiting one of the more family-friendly carnivals or going before the big party gets into full-swing. For information on the things you need to be aware of when travelling to the USA, read our guide here.

There are a number of deep cultural influences at play in Cuba’s biggest annual party. As the country is a firm-favourite among British holidaymakers, those travelling to Cuba in late July should try to make it over to the east of the island for this spell-binding celebration.

Enormous groups of promenading musicians fill the streets with rhythm while dancers in elaborate and vibrant costumes pass by. Cuba’s balmy evenings don’t come more thrilling than this annual event in the nation’s second city.

You might not have heard of Sitges, the small town outside Barcelona that isn’t famous for much. But in one respect, it is an international heavyweight: carnival. Sitges is known for being one of the most gay-friendly carnivals. It is among the more risqué carnivals but, unless you are easily offended, there is something for everyone.

The arrival of the king marks the start of the week-long event, including the tantalisingly-named Road of Debauchery. Toward the end, drag queens dressed in black mourn the impending period of abstinence (Sitges remains closely tied to the Christian underpinning of the festival). At last, a giant sardine effigy is burned and buried, symbolically and literally ending the festivities.

For things to take into consideration when visiting Spain, read our guide here.

Venice Carnival is among the most family-friendly and artistic events. This wasn’t always the case; it was outlawed for ages owing to its licentiousness. However, since 1979, it has been a focal point of Venetian culture and tradition, some of which goes back hundreds of years.

One of the many things inherently associated with Venice – masques – came to prominence via the annual carnival. The splendid and occasionally outrageous costumes and masks on display are a real treat and if you don one too, you can get as involved in the surreal landscape as the locals. 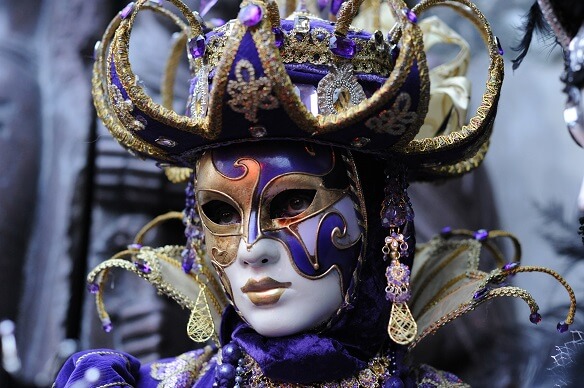 For something reasonably close to the UK, the Binche carnival is situated near Mons and isn’t far from Brussels. And though most carnivals have a surreal element to them, Binche does push the envelope.

The main event is the procession of the ‘Gilles’ – normally men dressed in a costume associated with this carnival. They wear wax masks which are a little unnerving and can appear in vast numbers. Throwing blood oranges into the crowds as symbols of good luck, these characters are respected by the local culture and many of the town’s men aspire to become one at some point (though young kids can also be Gilles).

Their costumes range from the interesting to the elaborate, with ostrich feathers adorning some headdresses.

The uniqueness of the Binche carnival has earned it recognition by UNESCO though its origins are shrouded in mystery. Nonetheless, the annual practice of this highly-ritualised carnival gives those who attend a deep feeling of mystery and community, making it high among the carnivals worth visiting.

Wherever you go, enjoy carnival safely

Whether you’re dancing in the streets at Notting Hill Carnival or donning a masque in Venice, stay safe. As well as avoiding scams and pickpockets, know your limits with alcohol to avoid potentially invalidating your travel insurance as well as putting yourself at unnecessary risk.

Carnivals are a brilliant way to get a deep sense of a culture’s traditions. And the best bit is, many of them take place during the tourism low season (February and March). So as well as getting involved in the fun of the party, you might bag yourself a travel bargain too.

For Super Economy, Economy, Standard, Premier and Premier Plus Policies

For Classic, Superior and Superior Plus Policies

The above details can be checked on the Financial Services Register by visiting the Financial Conduct Authority website and searching by Firm Reference Number (FRN).