What you need to know

On 4 April 2017, a new €50 note will start circulating across the euro area, so you’re likely to see it in your travel money this summer.

The new note is part of an ongoing campaign to make euro banknotes more secure. Like the revamped €5, €10 and €20 notes in this series, the €50 note features a portrait of Europa – a figure from Greek mythology.

Europa Series denominations have stronger colours and more striking images than the old notes – making them easier to spot. The new designs also include the latest anti-fraud features that make these notes harder to counterfeit.

If you hold the new €50 note up to the light, the portrait window should turn transparent and you’ll see a hologram of Europa on both sides. There’s also an emerald number on the note, which changes colour from emerald green to deep blue when you tilt it. 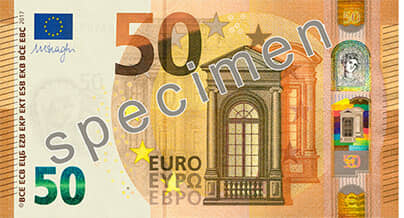 Yes, you can. To use up remaining stocks, the European Central Bank will keep issuing old €50 notes alongside the new ones. So don’t be worried if you find both in your wallet.

The old banknotes are still valid, so you can keep using them – or exchange them for new notes at any Eurosystem national central bank. You can also exchange old notes back into sterling at a Post Office.

The €50 note is the most widely used euro denomination. It makes up more than 8 billion (about 45%) of all euro banknotes in circulation.
Check the latest Euro exchange rate.

What is the Europa Series?

As well as offering better protection against counterfeiting, the new notes also take into account the countries that have joined the European Union since 2002. For instance, the map of Europe shows Malta and Cyprus, and ‘euro’ is written in Cyrillic (the alphabet used in many Eastern European languages) as well as the Latin and Greek alphabets. Also, the initials of the European Central Bank now appear in linguistic variations.

Will more notes be added?

To use the new €50 note on your next European trip, you can order your euros online.

Get a great rate by ordering your Euros from us