Many of us won’t think about everything a funeral involves until we need to. But if you’re asking yourself ‘how much does a funeral cost?’ then you may not realise just how important a factor location can be for your budget.

One of the first things to organise when planning a funeral is where it will take place. There are a few considerations that can impact this decision, like the availability of funeral directors and crematoria. But cost could be a significant concern too.

The rule of thumb for funeral providers is that a funeral location is within 10 miles of where the person died, however this is not set in stone, and technically you can have a funeral anywhere you wish.

This flexibility is good news, as the cost of a burial funeral can vary greatly by location*. We’ve got a breakdown of prices for burial plots all over the UK as well as information on other things you might want to consider to bring the total cost of a funeral down.

Map of funeral costs across the UK

Costs vary across the country, but to give an indicative sense of the range of cost, we’ve shown the most expensive and the most affordable in the graphics below. Greater London has by far the most expensive land for burial. Our image below breaks down the areas of London and the South East in further detail. 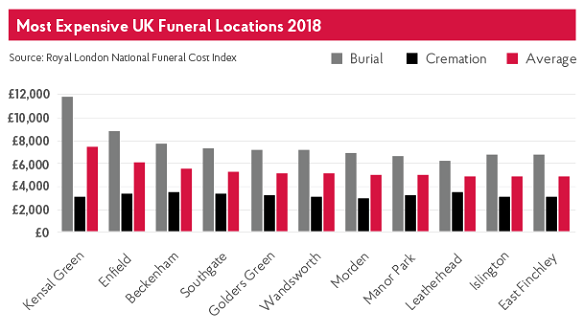 Four of the highest-cost areas for a funeral are in the South East.

In some areas of the UK, the largest city in the region involves some of the higher costs. Data in the report suggests that is not universally the case. In Scotland, for instance, both the highest and lowest costs for burial funeral are in the Glasgow area. In Wales, Cardiff is the cheapest area for cremation funerals.

So it doesn’t always follow that the more populous areas are necessarily more expensive. Indeed, some areas that are quite rural can have higher costs.

Overall, cremation funerals are less expensive than burials, with prices never exceeding (and rarely coming close) to the £4,000 mark. 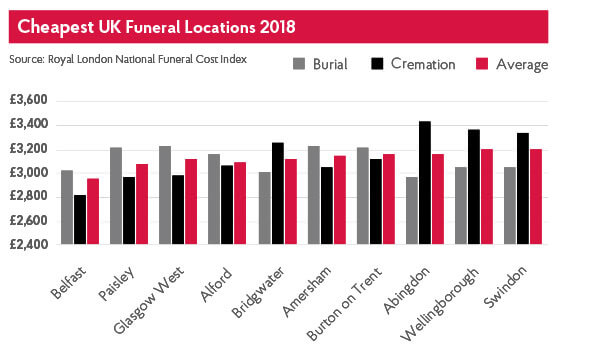 Belfast in Northern Ireland is the cheapest location in the entire UK for both cremation and burial funerals.

These charts only give the highest and the lowest prices, and there is likely to be some variance between the two poles for any area. However, it can be helpful to know the costs of funerals near your locality if you are planning a funeral.

Looking at the chart of the most expensive locations in the UK, it’s clear that 10 out of 11 are in London. The London cost for burial funerals is consistently above the national average, however cremation funerals are roughly in-line with the norm. If you’re planning a funeral in London, researching which are the most and least expensive areas for burial can help you budget better.

If you were planning a burial funeral but weren’t aware of the scale of costs involved, you might want to consider cremation instead. Its costs are reasonably uniform across the country and tend to be lower than for burials.

But if your loved one has strongly stipulated that they wish to be buried, you can bring costs down by having a direct burial funeral, which is where the body is interred without ceremony or the presence of family. This means that things like a minister, an expensive coffin or casket and other costs associated with the ceremony can be avoided.

Other ways to save money on funerals

Regardless of where one hosts a funeral, it is clear that expenses can easily run into the thousands. The figures in these tables are for the cost of burial/cremation, the funeral director’s costs, minister’s fee and, where relevant, doctors’ fees.

They don’t include things such as a wake and the costs associated with that, which can rapidly add up if you include venue hire and catering.

Direct cremation and direct burial are forms of funeral that are becoming increasingly popular. These are the most cost-effective means of arranging a funeral, where the deceased is cremated or buried shortly after death without ceremony or any family present. In the case of direct cremation, the remains can then be sent to the family to scatter or keep as they see fit.

These types of funeral can offer significant savings when compared to traditional funerals as the only fees are those of the crematorium or burial service.

Shopping around can lead to savings for things such as coffins or caskets, printing materials and funeral directors. Low-cost funerals are offered as options by many funeral companies.

A good way to ensure there is money available for a funeral is Over 50s Life Insurance. Whether you are considering taking it out for yourself or know someone who would benefit from it, it’s good to do some research.

A policy can provide a payout that can contribute towards funeral costs or, in the case of larger payouts and more cost-effective funerals, cover the expense completely. For the policy holder, this can provide peace of mind, as they have reassurance that their loved ones won’t be out of pocket when they die.

Ways to get covered

Choose between level, decreasing or increasing term insurance, each designed to offer you peace of mind based on your circumstances.

Get extra cover for your little ones and financial peace of mind that your children are covered, by adding the optional children's cover to your Post Office Life Insurance.

Get extra protection and financial peace of mind by adding the optional critical illness cover to your Post Office Life Insurance.

Get help with an existing Post Office Money Life Cover policy, or find out how to make a claim.