Coins from The Royal Mint 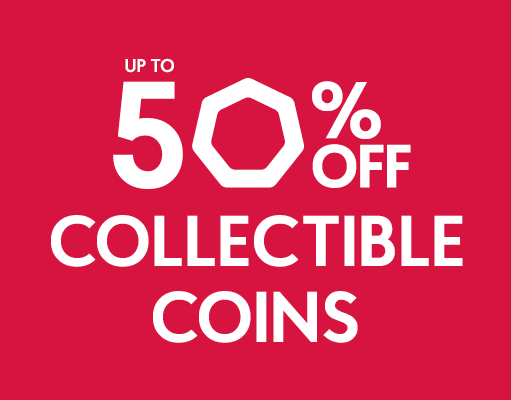 There’s never been a better time to start collecting!

We’ve partnered with The Royal Mint to bring you collectible coins in selected Post Office branches. What’s more, we have a very special offer for a limited time only - 50% off most coins in selected branches, while stocks last. The coins make ideal gifts. Or use this special promotion to start or expand your own collection.

Or you can buy online directly from Royal Mint*

*50% promotion offer does not apply to items bought directly from Royal Mint.

This year, give a Christmas card your loved ones will want to keep forever. The Nutcracker coin is the shimmering centrepiece of this magical Christmas card.

What does the Royal Mint do?

The main role of The Royal Mint is to make and distribute Britain’s coins, including every coin in circulation here today. But it also strikes coins for up to 60 other countries every year too.

What’s the history of the Royal Mint?

The Royal Mint is one of the UK’s great and world’s oldest institutions. Its history stretches back over 1,000 years – from the workshops of Anglo-Saxon London to today’s modern minting facility in South Wales.

The Royal Mint has consistently evolved, combining state-of-the-art technology and centuries of craftsmanship to lead the way in the world of coins and currency. Its commitment to excellence and innovation is recognised around the world as an example of best practice in the industry.

Where is the Royal Mint?

The Royal Mint is located in Llantrisant, South Wales.

How are the coins created?

Each circulated coin is made from long strips of an alloy that’s rolled to the right thickness, cut into discs and cleaned. A model of the coin is scanned digitally and the file is used to make the die that will strike the coins. A press then strikes them at a rate of up to 850 strikes per minute. Find out more.

Uncirculated coins, including collectibles, are all hand crafted.

Can you visit the Royal Mint?

Yes. The Royal Mint Experience is the only place in the world where you can watch the United Kingdom's coins being made. You can even get the chance to strike your own coin.

To order by phone